What the US could learn from China's nuclear power expansion

China is embarking on the biggest expansion of nuclear power in human history. That could be great news. 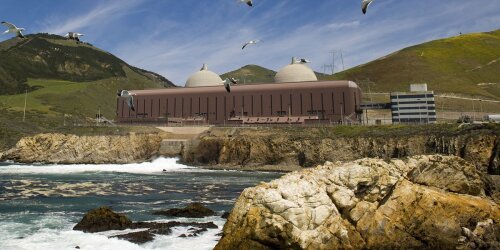 One of the world's great powers is making significant progress toward reaching carbon neutrality. It's not the US.

Like many countries, China has made a pledge to reach net zero emissions by 2060. Unlike many countries, it's actually doing something to get there. That's not a reference to its commitment to stop financing overseas coal plants, nor its steady expansion of wind and solar power. China's progress comes in the form of 150 new nuclear reactors, which it plans to construct over the next 15 years.

Just the mention of nuclear power is enough to make some wince. There's a powerful perception that these plants are unsafe and devastate the local environment. Yet nuclear power is clean, reliable and safe. Traumatic imagery of nuclear meltdowns like those at Chernobyl and Fukushima obscure the statistics: Coal kills about 350 times as many people per terawatt produced as nuclear.

China's expansion of nuclear power will be the biggest in the history of the world, but its merits go beyond simple scope. The country is also pioneering the use of "Generation 4" reactors, which promise to be safer and more efficient. One such design is known as a "pebble bed reactor," where atomic fuel is encased within graphite balls that can withstand more heat than nuclear fission is capable of generating. These pebble bed reactors are said to be incapable of meltdown. On Tuesday, China became the first country in the world to connect a Generation 4 PBR to the grid. Another is under construction.

The US and Europe were once enthusiastic about nuclear power, which promised to produce energy "too cheap to meter." Development of new plants reached a peak in the '70s, but a meltdown at Pennsylvania's Three Mile Island plant in 1979 soured enthusiasm. Seven years later, the Chernobyl incident in the Soviet Union killed it entirely. Two decades after that, as governments were rethinking their aversion to nuclear energy, Fukushima in 2011 acted as a nail in the coffin.

Since Fukushima, however, climate change has altered the equations by which we calculate nuclear energy's merit. The world needs to drastically ramp up power production, yet it can no longer rely on the polluting means it's long been accustomed to. Solar and wind power are important elements of a carbon-neutral future, but there's fierce debate over whether they alone will be sufficient. Acceptance of nuclear power has been on the rise as a result, with a May study reporting that 76% of Americans are in favor of atomic energy, the highest percentage since pre-Fukushima.

"If you're going to decarbonize the global energy system, you're going to need a lot of energy, a lot more than we have," said Armond Cohen, executive director of the Clean Air Task Force. "We [support] nuclear from around the bend. It's not like we're pro nuclear, we're pro 'anything that can solve the climate problem'."

China's nuclear expansion is a double opportunity. The People's Republic emits nearly a third of the world's carbon and burns six times as much coal as the US. If nuclear energy can reduce those emissions, the whole planet will benefit. An even better scenario would be China developing cheap, safe reactors that can be constructed around the world. Many governments make big claims about reducing carbon, but few have charted a course to actually getting there. Nuclear adoption will help.

China has not come out of 2021 in a positive light. In addition to ongoing genocide in Xinjiang, the Chinese Communist Party this year embarked on a heavy-handed Big Tech crackdown and has set a questionable example on COVID management. But on the topic of nuclear energy, at least, it appears China has something to teach the US.

For its part, the US has gone the opposite route. In April, New York's Indian Point Power Plant had its final reactor shut down. California plans to close two reactors in 2025 that generate 15% of its carbon-free electricity. Less nuclear doesn't necessarily mean more solar or wind, as environmentalists hope, but rather more natural gas. New York's gas usage was 30% higher in November compared to the same month last year, according to S&P research, with the closure of the Indian Point plant being a major cause.

The public's association of nuclear power with calamity is one reason why atomic energy has languished in the West. The other key issue is cost. Nuclear plants were once relatively affordable to build, but many argue they're prohibitively expensive. The price tag for two overdue reactors being built in Georgia looks to exceed $27 billion.

It doesn't have to be this way, says Jacopo Buongiorno, professor of nuclear science at the Massachusetts Institute of Technology. He points to numerous reasons that costs have ballooned. First, giant infrastructure projects of all kinds have seen more delays and cost increases in the West, not just nuclear power plants. Second, the US and much of Europe went on a 20-year nuclear hiatus after Chernobyl. Nuclear construction know-how and efficiency were lost during that time.

"In Asia, the company that designs the plant is often the same company that builds and then operates the plant," he said. "In the US we have seen the technology companies that create the blueprints for components and modules toss them over the fence to another company that then has to build them."

"If the two sides have not talked to each other from the very beginning, there is no guarantee that what was designed is actually constructible."

Nuclear power in the US does have one specific challenge not faced by other industries: the complex web of regulations that's been spun in the years since Chernobyl. China's method of nuclear expansion is similar to the one proven to work by France in the '70s: Design a few plants and then build a lot of them. Meanwhile, different states in the US have different safety requirements, which inhibits any company's ability to standardize design.

"Nuclear needs to be heavily regulated, but it's inefficiently regulated," Cohen said. "Is it really plausible that we're going to have 27 designs in the world?"

He looks to the airplane industry as an example of how to streamline. Companies like Boeing and Airbus have only a handful of aircraft designs. That makes it easier to mass produce, but it also simplifies problem solving. It's easier to work out why 1,000 planes have the same issue than to solve 20 different issues across 20 different designs.

"If China can bring a cheaper unit to the world, just as they brought cheap solar panels, then bring it on," he said.

China's nuclear ambitions don't end at its own borders. One of President Xi Jinping's signature projects is the Belt and Road Initiative, which sees China building bridges, airports and other infrastructure across the developing world. If China can make capable reactors at competitive prices, they can be exported across Africa and energy-hungry countries like Pakistan and Bangladesh. One senior Chinese Communist Party member said he hopes China will build 30 reactors overseas by the end of the decade.

"China has already announced that they're not going to make any coal investment overseas, so the next phase of infrastructure is going to be nuclear," said Sha Yu, associate research scholar at the Center for Global Sustainability. Yu expects that nuclear space in China's energy mix will expand considerably in the next three decades, from around 4% now to between 15% and 25% by around 2050.

Such advancements may prod the US into revitalizing its interest in atomic energy. Several companies already have next-generation nuclear plants in development. X-Energy has a pebble bed reactor it hopes will be operational by 2027, and the Bill Gates-backed TerraPower is advancing toward meltdown-proof reactors that run off depleted nuclear fuel. NuScale last month struck a deal to build a small modular reactor in Romania.

The question is how much these activities will be supported by the government. There are some signs of life. President Joe Biden's landmark infrastructure bill will see just under $10 billion devoted to nuclear projects, including $3.2 billion that will go to developing Generation 4 technology. More was to come in Biden's Build Back Better legislation, though that bill's future is now in doubt.

"The Biden Administration's plan is to have a carbon-free grid by 2030. That is an enormous challenge, and the resources that are being discussed now are not commensurate with its magnitude," said MIT's Buongiorno.

"It's a fantastic start, but we're going to need a lot more."