Thousands of climate activists around world demonstrate as part of global climate strike. 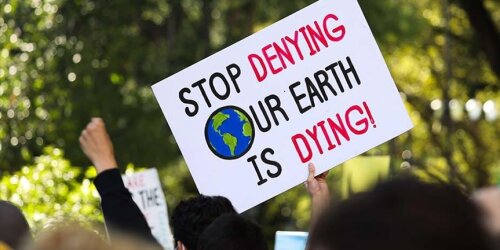 Climate protests and environmental campaigns continued to be held both physically and virtually, along with a large number of demonstrations protesting political and economic policies across the world.

Protests and strikes were held both in streets and on social media across the globe, calling on world leaders to address and take urgent actions on climate change and to keep their promises on limiting global warming to below 1.5 degrees Celsius (2.7 degrees Fahrenheit).

The Fridays for Future movement was leading the global climate and environmental demonstrations during 2021 while the 350.org and Sunrise movements, Greenpeace, and the Extinction Rebellion group were also involved in many actions over climate-related activities.

The following are the major global climate change protests, strikes and events in 2021:

- With the importance of global cooperation in the fight against climate change stressed, Fridays for Future Scotland says "Let's make 2021 the year for climate justice!"

- Leah Namugerwa, a 16-year-old Ugandan activist, completes her 100th "school strike 4 climate" in the second Friday's strike of the year.

- Fridays for Future calls on climate protesters and concerned citizens worldwide to join the global climate strike, the first one of the year, on March 19. "We say #NoMoreEmptyPromises! Immediate action NOW!"

- Indian police lodge a complaint against Swedish climate activist Greta Thunberg over her tweets on the then farmer protests in India.

"I still #StandWithFarmers and support their peaceful protest. No amount of hate, threats or violations of human rights will ever change that. #FarmersProtest," Thunberg says on Twitter in response.

- A group of activists in Jamalpur, Bangladesh stage a climate strike while observing social distancing and holding signs saying "No more excuse."

"When I started striking 100 weeks ago, I never thought I would go on doing this for so long, but I did. I'm very proud to be doing my part in this journey to save our future," she says on Twitter.

- Youth Advocates for Climate Action Philippines calls on Standard Chartered and Industrial and Commercial Bank of China to keep their promises on divesting from fossil fuels, saying: "It's time to #RaiseYourStandards!"

- As part of the global climate strike, many activists online or physically attend action in over 1,000 places in 68 countries, Thunberg says on Twitter, adding: "Soon we'll be back on the streets again."

- Police arrest environment activists who staged a demonstration in front of Singha Durbar in Nepal's capital Kathmandu while demanding that the government implement a "climate, health emergency."

- The Rise up movement shows solidarity with East African people who are protesting against the construction of a crude oil pipeline that will possibly leave as many as 14,000 households displaced.

- Climate activists and environmental protesters criticize the Leaders' Summit on Climate, which is held virtually by US President Joe Biden with the attendance of 40 world leaders for "not taking real action needed for climate justice."

- Climate activists and environmental protesters around the world hold "StandWithWorkers" social media campaign to show solidarity with workers on International Workers Day, "as they are on the frontlines of climate change."

- Fridays For Future reminds that at least 20 journalists died as a result of reporting on environmental destruction over the past decade and it shares solidarity with journalists who are being persecuted for their work on World Press Freedom Day.

- Campaigners from "Paid to pollute" takes the UK government to court to pull plug on public payments for "big polluters."

"The government has wasted billions of pounds of public money propping up the oil and gas industry," they say.

- Workers and students, led by the Strike for Future movement, hold streets in Switzerland, demanding social and climate justice.

- Environmental groups show solidarity with indigenous communities around the globe following tragic reports of missing and murdered indigenous women and girls in Canada.

- Climate activists gather at Cornwall to protest a G7 meeting and call on world leaders to act against climate change.

- Fourteen-year-old Turkish climate and environmental activist Yagmur Ocak completes her 100th week of climate striking. "Now is the time to unite and to continue fighting for our future together with all climate activists," she writes on Twitter.

- Four Extinction Rebellion activists enter the Royal Ascot race track in the UK with a banner reading "Racing to extinction" and calling on Queen Elizabeth II to "act now" in the face of biodiversity loss and climate emergency.

- This year's global climate strike will be held on Sept. 24, Fridays for Future announced: "We will strike to demand intersectional climate justice! Our fight must be a fight for the present and the future, alongside the most impacted sectors of society. Join us!"

- Young climate and environmental activists gather in front of UN headquarters in New York amid the High-Level Political Forum 2021, to demand "those in power must stop the same".

- Twelve activists "occupy" the UK government building in Edinburg by staging a sit-in, calling on officials to end the Cambo oil field project.

- "Climate crisis is pushing Africa's indigenous people in Kenya to extinction," Fridays for Future Uganda says on Twitter, adding that those people rely on Lake Turkana for food but the lake shrank in the past few years due to climate crisis.

- Environmentalists and climate activists say the latest Intergovernmental Panel on Climate Change report "does not say anything new" as Swedish teenage activist Greta Thunberg also says on Twitter that it contains no real surprises and confirms what people already know.

- Environmentalists protest the German government's climate policies in Berlin as the Extinction Rebellion group block roads leading to the Ministry of Food and Agriculture building.

- Hundreds of environmentalist protesters descend on central London on a third day of mass protests planned across the British capital.

- Climate and environment activists in New Zealand complete their 106th week of a climate strike in front of parliament.

- German activists enter day 16 of a hunger strike in front of the chancellery in Berlin to draw attention to the impact of climate change.

- Four activists from Youth for Green Communities hold a climate strike, marching for 25 kilometers (16 miles) in Uganda to raise awareness on investing in clean energy, as well as demanding the government pass a climate bill.

- Tens of thousands of climate activists around the world demonstrate as part of the global climate strike.

- Climate activists in Milan hold protests amid the pre-COP26 meeting in the Italian city.

- Greenpeace activists block Shell refinery in the Rotterdam port, the Netherlands, to protest the media and sponsorships of oil and gas companies.

- Thousands of people march in Brussels to raise awareness on climate change prior to the UN COP26 conference in Glasgow.

- Masses gather at Trafalgar Square and march to the British prime minister's office to protest the killing of hundreds of dolphins on Denmark's Faroe Islands as activists also call for sanctions on the islands.

- Supporters of the Animal Rebellion movement climb UK's Defra (Department for Environment, Food and Rural Affairs) and the Home Office building in London, demanding support for a plant-based food system at COP26.

- A "COP26 Hot Air Band" involving Oxfam activists dressed in Scottish kilts and carrying bagpipes and drums, and wearing masks of presidents and prime ministers takes part in a protest in Royal Exchange Square during the COP26 UN Climate Summit in Glasgow.

- The COP26 summit being held in Glasgow has failed, and it is no secret, says Swedish climate change activist Greta Thunberg.

- Tens of thousands of people march through the streets of Glasgow, Scotland to protest against the negative effects of climate change and for Scottish independence.

- Fridays for Future releases a statement after the end of COP26 that defines the results as "disappointing."

- On the occasion of International Human Rights Day, environmentalists raise awareness on social media, remembering environmental defenders and activists who are under threats.