Save the Children confirms staff killed in Myanmar massacre

Rights group says two staff members among more than 30 people killed by the military on a highway in Kayah state. 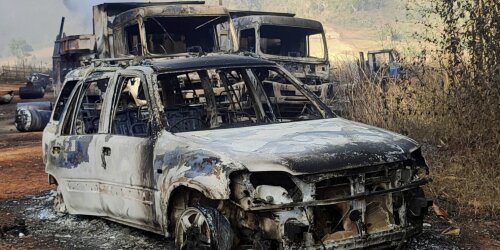 Save the Children has confirmed that two of its staff were killed in a Christmas Eve massacre blamed on the military that left more than 30 people dead on a highway in eastern Myanmar.

Anti-military fighters said they found more than 30 burned bodies, including women and children, on a highway in Kayah state where pro-democracy rebels have been fighting the military.

“It is with profound sadness that we are confirming today that two members of Save the Children’s staff were among at least 35 people … who were killed on Friday 24th December in an attack by the Myanmar military in Kayah State, in the east of the country,” the UK-based organisation said in a statement on Tuesday, adding both employees were new fathers.

Save the Children claimed members of the military “forced people from their cars, arrested some, killed many and burnt the bodies”.

“We are shaken by the violence carried out against civilians and our staff, who are dedicated humanitarians, supporting millions of children in need across Myanmar,” he added.

The United States on Tuesday called for an arms embargo on Myanmar’s military government.

“The targeting of innocent people and humanitarian actors is unacceptable, and the military’s widespread atrocities against the people of [Myanmar] underscore the urgency of holding its members accountable,” US Secretary of State Antony Blinken in a statement.

“The international community must do more to advance this goal and prevent the recurrence of atrocities in [Myanmar], including by ending the sale of arms and dual-use technology to the military.”

Myanmar has been in turmoil since the military overthrew the elected government of Nobel laureate Aung San Suu Kyi in February, claiming fraud in an election her party won.

More than 1,300 people have been killed in a crackdown by security forces, according to a local monitoring group.

Self-proclaimed “People’s Defence Forces” have sprung up across the country to fight the military government, and have drawn the military into bloody rounds of clashes and reprisals.

Myanmar’s military previously said it had been attacked in Hpruso township on Friday after its troops attempted to stop seven cars driving in a “suspicious way”.

The Myanmar Witness monitor said it had confirmed local media reports and witness accounts from local fighters “that 35 people including children and women were burnt and killed by the military in the attack”.

Satellite data also showed a fire had occurred at approximately 1pm (06:30 GMT) on Friday in Hpruso, it added.

United Nations Undersecretary-General for Humanitarian Affairs Martin Griffiths later said he was “horrified” by the reports and demanded the government conduct an investigation.

Save the Children, which has a staff of about 900 working in Myanmar, later said it had suspended operations in Kayah state and several other regions.

In October, the group said its office in the western town of Thantlang was destroyed in military shelling that also razed dozens of homes following clashes with a local anti-coup group.