The former president and his legal team are seeking a preliminary injunction to prevent the National Archives from turning over records from his time in office to House investigators. 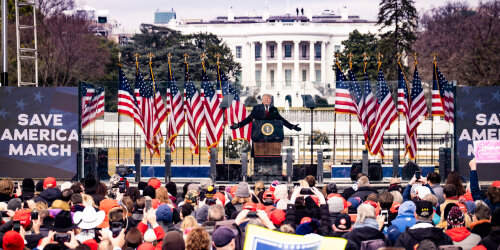 Donald Trump filed a petition on Thursday asking the Supreme Court to block a House committee investigating the Jan. 6 attack on the Capitol from obtaining White House records after the former president suffered recent defeats in lower federal courts.

Trump has sued the Jan. 6 select committee for requesting records from his administration that are currently housed at the National Archives and Records Administration as the panel seeks to learn more about the former president and his allies' potential involvement in the deadly riots as well as any efforts in trying to overturn the 2020 election results.

After the most recent defeat at the D.C. Circuit Court of Appeals on Dec. 9, the lower court issued a temporary stay on the processing of records for two weeks to allow for Trump and his legal team to file an appeal to the Supreme Court. Thursday was the deadline to do so.

The case notably pits a current president – Joe Biden – against a former officeholder. Biden declined to waive Trump’s executive privilege request over the first few batches of documents because of the gravity of the Jan. 6 riots and the need for trying to prevent future threats on the Capitol. And depending on what the Supreme Court does, the effort could continue to slow down the committee’s investigation as Trump allies and former staffers refuse cooperation with the panel.

Trump’s lawyers argue that the document request is “sweeping” and covers confidential records from his time at the White House. They also believe it infringes on a former president’s rights of privilege. According to the filing, the former president and his team want the court to examine whether the request violates the Constitution or other federal laws and to grant him a preliminary injunction preventing the Archives from transferring records to House investigators.

“At stake is the ability of Presidents – past, current, and future – to rely upon executive privilege, separation of powers, and the Presidential Records Act to protect confidential Presidential records of deliberations from premature production to political rivals. The Committee’s improper records request should have been rejected out-of-hand; the D.C. Circuit’s decision upholding it was wrong,” Trump’s legal team wrote in its filing.

Earlier this month, three judges on the D.C. appellate court unanimously ruled against Trump’s effort to block the turnover of records after an expedited timeline to consider the lawsuit. They noted that both the executive branch and legislative branch agree there’s “a unique legislative need for these documents and that they are directly relevant to the Committee’s inquiry into an attack on the Legislative Branch and its constitutional role in the peaceful transfer of power.”

That decision came a month after U.S. District Judge Tanya Chutkan also rejected Trump’s effort, which cited similar reasons as the appellate court for allowing the transfer of documents.